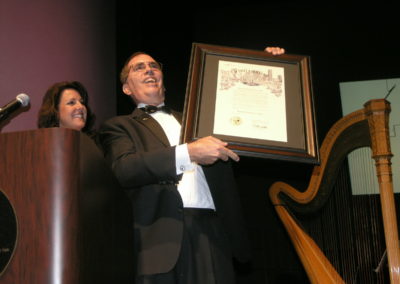 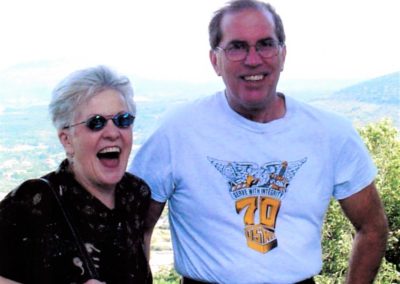 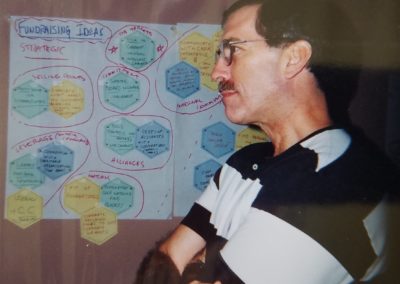 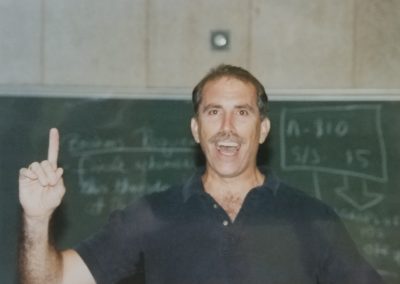 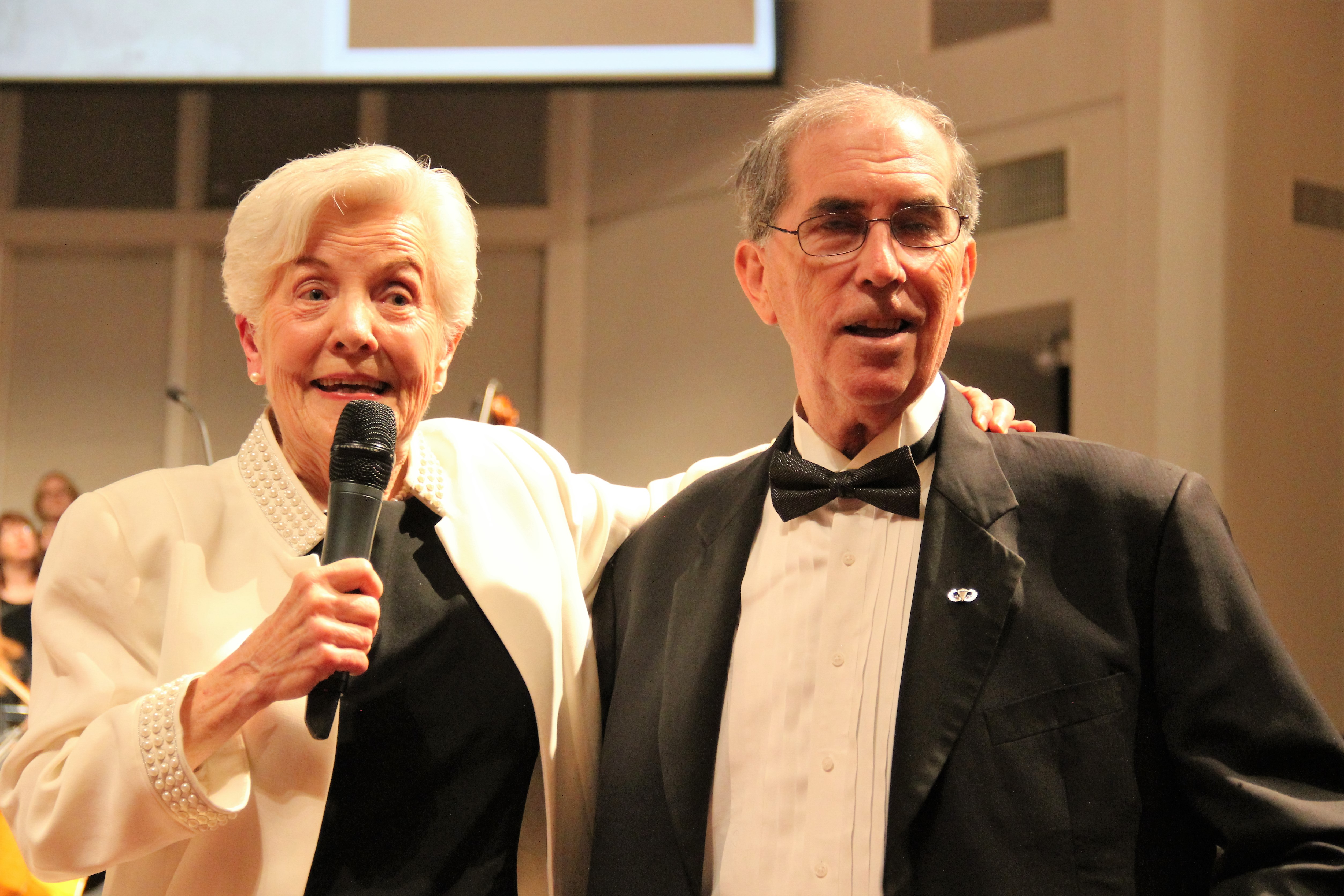 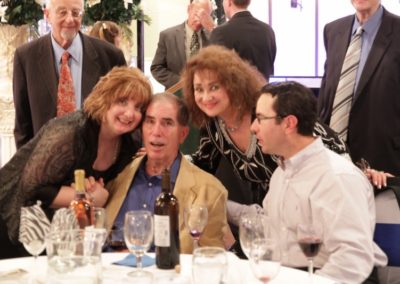 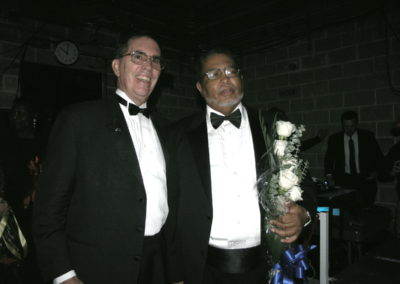 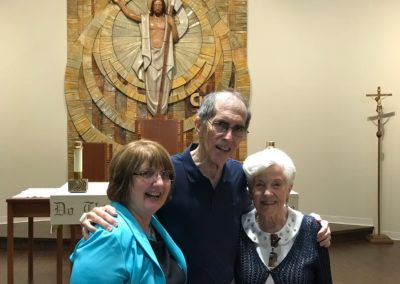 With deep admiration and appreciation, Houston Choral Society remembers Robert Sinclair “Bob” Frank, a great friend to many, an influential role-model, and a significant figure in the history of our organization.  We are heartened to know that he now enjoys that “divine embrace” after a years-long journey exhibiting humility and grace as he endured the effects of Parkinson’s Disease.

Bob’s joining HCS in 1991 marked the beginning of an extraordinary working partnership and intense personal friendship with Dr. Betty Devine, the group’s founding artistic director.  Their shared vision, optimism, and motivation were the driving force that powered HCS for many years.  Bob’s swing-for-the-fences approach resulted in many opportunities for a growing community choir to build quite a résumé of accomplishments.  A West Point graduate who advanced to Captain in the Army Airborne, Bob had served in strategic intelligence and armor.  Bringing the discipline and structure of military leadership to HCS, as President for eight seasons (1994-1996 and 2002-2008), Bob supplied not only the enthusiastic leadership to achieve great advancements, but also the know-how to implement practices that have become long-standing strengths and cultural traditions for HCS.

Scaling up the choir’s evolution through next levels, Bob enhanced the group’s degree of professionalism with overseeing collaborative improvement the bylaws, including outlining a governance structure that refined the board of directors and officer corps.  His leadership through organizational change saw the choir achieve milestones such as moving its operations to The Foundry Church (1996) and leaving the Houston Community College System to become established as an independent 501(c)(3) non-profit organization (1999).

Helping HCS extend beyond its immediate boundaries, Bob was a key facilitator of partnerships—both for performance and for community service—that expanded the organization’s footprint of influence.  In 1996, Bob arranged for the West Point Glee Club to join HCS for Imagine America, a joint presentation of Randall Thompson’s Testament of Freedom at the Wortham Center.  In 2002, HCS conducted a competition for soloists and gave a special performance of Verdi’s Requiem at the Wortham Center’s Brown Theater.  In 2003, HCS teamed with the Cy-Fair High School Choir and the Fort Bend Boys Choir to present Carmina Burana at the University of Houston’s Moores School of Music (at which time, Bob expanded his rally cries beyond the military “Hooah!” to include the musical “Nazaza!” from that work).  For the choir’s 25th anniversary in 2008, Bob played a vital role in planning the choir’s Hands Across Houston event, including a Wortham Center Cullen Theater performance of Set Me on a Rock, a major work that HCS commissioned from Adolphus Hailstork for the occasion.  In 2010, HCS partnered with the Prairie View A&M University Concert Chorale in Two Choirs Festival: The Power of Unity, furthering HCS’s ongoing desire to exemplify music’s unique ability to enhance diversity.

Bob’s superior talent for recruiting and for building relationships enhanced not only the choir’s performance opportunities, but also its bottom line.  Visionary yet ever-practical, Bob was instrumental in securing significant funding for HCS, including corporate support from Conoco Phillips for several years.  Donors perceived Bob as representing a high-quality, worthwhile enterprise—and he consistently managed the troops to ensure that HCS met and exceeded expectations.

Extending the reach of HCS to the international level, much is attributed to Bob’s efforts in instigating the group’s European tours.  Under his guidance, the choir traveled to perform in England and Scotland (2001); in Italy (2004); and in Prague, Vienna, and Budapest (2007).  Though his absence on subsequent trips was felt poignantly, he was there in spirit, and the continued use of his crowd-management “squad system” would provide multiple daily opportunities for both singers and tag-alongs to continue appreciating Bob.  Mapping Bob’s influence beyond international to NASA territory, it was under his leadership HCS voices voyaged beyond Earth, our rendition of Haydn’s “Awake the Harp” serving as the astronauts’ Wakeup Call for Space Shuttle mission STS-76.

Bob’s connectivity went hand in hand with his generosity.  As he engaged prominent figures for events he spearheaded, HCS shared the stage with an impressive list of notables, from mayors and governors to Nelson Mandela and Barbara Bush.  Partner nonprofits benefiting from HCS performances and outreach projects have included the Houston Food Bank, Neighborhood Centers, Inc. (now BakerRipley), Shriners’ Hospitals for Children-Houston, and M.D. Anderson Cancer Center.

After he retired from HCS in 2013, the Board of Directors honored Bob with the title “President Emeritus” in recognition of his valued service.  For the choir’s America, the Beautiful concert that October, Bob—a man of passionate and unwavering patriotism—was able to return to Foundry and direct the HCS men in singing “Mansions of the Lord.”  In June of 2017, HCS performed “A Tribute to Bob Frank” for the residents of St. Dominic Village, the senior care community in Houston where he spent his final years.

Even when Bob could no longer sing with the choir, his voice—not his resonant bass singing voice, but his voice of experience, voice of wisdom—continued its positive influence on the group.  In 2014, adapting the proven executive-headhunter strategies developed for his management consulting business Pointer Resources, Inc., Bob developed a transition process for HCS to use in staging retirement phases for the organization’s beloved founder, Dr. Betty Devine, while identifying a new artistic director to succeed her.  Conducting a formal search process with Bob’s guidance and collaboration, the HCS Board could not have realized a better outcome than its selection of Dr. Kevin Klotz, who continues to express gratitude for the influence and legacy of Bob Frank.